We were up earlier than anticipated and left the house to go on holiday  just before 8:30. Our late summer holiday was going to be in Polzeath down in Cornwall followed by a week in Devon. Sat nav told us the best way to go was via Bicester and Oxford then down to Swindon and onto the M4 before joining the usual road  to the south west eventually ending up on the A30. We hit the usual big traffic jam at Bristol but the traffic pretty much kept moving and by the time we stopped at the Sedgemoor motorway services just after Bristol we had only lost half an hour which is pretty good going.

As is traditional we had planned a stop at a National Trust property on the way there today choice was Castle Drogo. Helen was not amused when I decided to follow the single track signs to the property. It meant having to stop a few times to let cars and buses go by. In any event we got there without any mishaps parked up and got our tickets to have a look around the Castle. It turns out the castle was in the middle of a very extensive renovation project. The whole Castle is completely enveloped in scaffolding and plastic sheeting. On the inside of the castle they have some of the stuff in storage but they had special art exhibitions on in various rooms where you could see some of the historic things that might have been out had the house was open. The building itself is grey granite which looks very structural and it is a house I would like to return to someday. Our timing was not that great the trips up the scaffolding tower were shut for lunch, so rather than wait an hour we went to get some lunch at the visitors centre.

The queue at the cafe was interminably slow they needed someone to come in and do a time and motion study to get things moving a bit faster. We didn’t fancy the soup of the day or sandwiches so we both settled for cake, we are on holiday after all. Suitably replete we got back in the car and headed to Wadebridge where we wanted to pick up some supplies before heading the cottage in Polzeath. 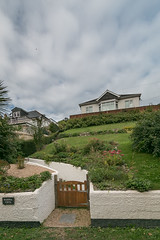 On the smallish road that got us over the A30 we came across some slow traffic, a couple of caravans, which looked more like chicken huts on wheels and were being towed by vintage tractors, they were from Germany!

We did a quick tour of the shops of Wadebridge and I managed to get a hair cut without queuing, the hair dresser corrected my pronunciation of Polzeath apparently it is zeath pronounced like wreath. The co-op supplied us with some salad ingredients and emergency pasta meal, so we were all set to arrive at the cottage.

We had earlier got a text to say that the cottage was ready which I thought was a nice touch. The final few miles to the cottage were very rural. We found the cottage easily by the instructions provided. It over looks a valley which is a caravan park and even has a distant view of the sea. We were not prepared for the many steps up to the front door. I was regretting buying a new large holdall for holidays, I had to stop for a rest on the way up.

We unpacked and had a sit down then walked down to the beach to have a look around, it was a bit grey and the sea was a bit rough. Luckily for us there was a bar Cafe on the beach where we could get a beer, and some WiFi. Helen had committed the ultimate crime of booking a cottage with no WiFi!

We had salad for tea and I was in bed fairly early with a book.