I enjoyed walking the Thames path a couple of years ago and decided that I would walk it again this year. The weatherman was promising good weather for Saturday and Helen was away so it seemed like the right day to start. I was not wrong. 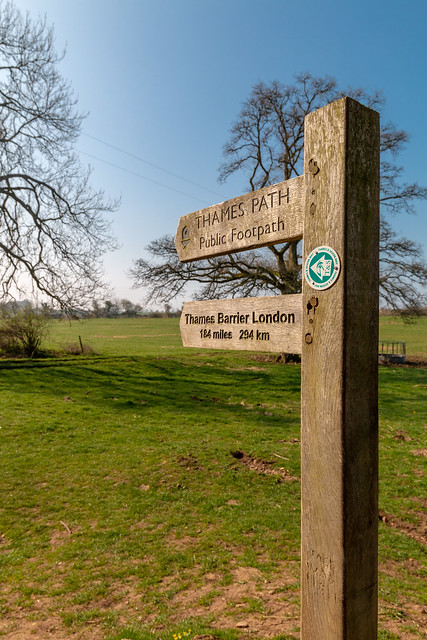 The Thames Path is a National Trail following the River Thames from its source near Kemble in Gloucestershire to the Thames Barrier at Charlton, south east London. It is about 184 miles (296 km) long. A path was first proposed in 1948 but it only opened in 1996. The Thames Path’s entire length can be walked, and a few parts can be cycled. Some parts of the Thames Path, particularly west of Oxford, are subject to flooding during the winter. The river is also tidal downstream from Teddington Lock and parts of the path may be under water if there is a particularly high tide, although the Thames Barrier protects London from catastrophic flooding. The Thames Path uses the river towpath between Inglesham and Putney and available path elsewhere. Historically, towpath traffic crossed the river using many ferries. but crossings in these places do not all exist now and some diversion from the towpath is necessary.

The far end of the Thames is 1:40 drive from home, so I managed to get an early night and left the house at 05:45. Unfortunately I just missed the 07:30 bus from Cricklade, where I parked the car, to Cirencester. I then had to wait till 08:12 which was the one I had planned to get. It was cold at the bus stop. Google maps was tellin me that there was a 51a bus at 08:12 but the notice on the bus stop said otherwise. I toyed with Uber but then ended up downloading the StageCoach app, which confirmed the 08:12 was a thing.

The bus sort of followed the route would be walking, it was quite foggy in places but the sun was out and burning it away pretty quickly. I got off the bus at Chesterton Cemetery then walked through the grounds of the Royal Agricultural College where there was lots of jogging going on. There was not much jogging happening when I was at college! I soon left the grounds and into the countryside. There were a few small hills to cross, the only ones of the day, before I got to the source of the Thames. I had been up for 4 and walking for one hours by that time, so I sat on the rock that denotes the source, ate my sandwiches cheese pickle sandwiches and regretted not having a flask of coffee with me.

A couple arrived and we got talking one of them was doing the last stretch, but in the wrong direction. They kindly took my picture while I stood in front of the stone monument and sign point past the source it self, a pile of rocks. There was no water in sight. I headed off on my way just a tad to fast as it would result in blisters towards the end of the day. It is about a mile or so of walking before you get to a riverbed with water in it, but an friendly old boy walking his dog assured me that a month ago the field around were flooded.

The far end of the river is very clear, in the bright sun I could see the clak gravel bottom of bright green under water plants. I could see a swans head as it reached down in the the depths to graze on the weed. The path is very easy to follow just keep the river on one side and if crossed keep it on the other. For lunch I stopped at the White Hart in Ashton Keynes, where a pint of orange juice and soda water and a fish finger really hit the spot. They kindly refilled my water bottle.

I then entered the stretch that would take me through loads of gravel pits. I guess they are there from building the M40. From a walking point of view they are a bit tedious, I prefer meadows. Quite a few of them are private and some have houses or holiday house clones encircling them. I was not in the best of moods as that point because my quick pace had now resulted in blisters on both feet. I had had a similar thing happen a few times before, you would have thought I had learnt my lesson by now.

The last couple of miles took me back on to meadows again and my spirit rose gain. I stopped and took a timelapse with my new DJI Osmo Pocket camera. Then headed towards Cricklade where I grabbed a coffee and a cake before finding my car and heading home. It got home almost exactly 12 hours after I left a long day, but it was great to be back walking the Thames Path.